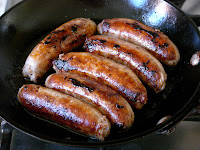 Is your book being translated into American? It's a question I’ve been asked a lot recently, as the US publication date of When I Was Joe approaches.*
No, I say, absolutely not. ‘Are you sure?’ people reply, ‘But will they understand it? It’s so….well, British…’
And now an American reviewer, for the prestigious Kirkus Reviews has raised the same point. ‘The staunchly un-Americanized text results in some odd, culturally specific references that could confuse some readers unfamiliar with the milieu: Kissing Ashley makes Ty's body sizzle like sausages in a pan, for instance.’
Although he likes the book enough to call it ‘a fast-moving page-turner …a complex, engaging read,’ the reviewer did worry that what he calls Briticisms would act as ‘speed bumps’ slowing down American readers. And clearly he did become a little confused himself, thinking that Ashley was Ellie’s sister.
Obviously I am proud to be staunchly un-Americanised (please note that I spell it with an ‘s’, not a ‘z’…which I pronounce ‘zed’, rather than ‘zee’). I was, after all, the mother at an International School who sent a pompous note to my daughter’s teacher asking that her spelling list be altered to include the ‘u’ in ‘neighbourhood.’ It was partly my experience of living in an international community in Amsterdam, where gradually you ease ‘Briticisms’ out of your speech for ease of communication, that made me revel in writing such an uncompromisingly British book.
But I don’t want American, or other readers, to sweat the speed bumps. Those metaphorical sausages for example. They are sizzling because they are being fried. In a frying pan. Which Americans might call a griddle. They are not frankfurters being boiled in a saucepan. Their skins could explode at any minute. I hope that’s now perfectly clear.
I would never have imagined that sausage cooking methods would create cultural confusion. And I find it hard to work out which words are staunchly un-Americanised and which are universal. Luckily the very wonderful Anne M Leone, an American writer based in England has made a list for me(see below) Print it out please, US readers, and keep it at your side as you read When I Was Joe.
But, if you can’t do that, don’t worry. I feel the Kirkus reviewer may underestimate American teens. After all British readers cope fine with references to bathrooms, vacation, proms and sophomores. We’re not too bothered by sidewalks and drugstores.

I much prefer a book where the language reflects its setting to one which has been blandly set in a mid-Atlantic Anywhere. We can't all travel to other countries. We can read books from all over the world.

Anyway, at least I have avoided the confusion caused by Louise Rennison where, in one of her fabulous Georgia Nicholson books, she refers to ‘a chav lighting up a fag.’ No…don't worry Americans...not that kind of fag!**

Those un-Americanised ‘Briticisms’ translated:
Canteen - cafeteria.
Custard creams – very nice biscuits. Unless stale. Whoops, sorry…very nice cookies.
Crisps – chips. And when Ty talks about chips he means fries.
Football - soccer.
Asda – Cheap supermarket.
Tesco – Slightly more expensive supermarket.
Newsagents - place to buy newspapers, magazines, cigarettes (aka fags) and candy...which we call sweets.
Petrol bomb A very basic explosive device. Petrol is gas.
Flat - apartment.
Soppy – silly, girly, sentimental.
Trousers - what do you mean they don’t have trousers in America? What do they call them? I don’t know… like jeans but not made of denim. Oh hang on! PANTS! Snigger, snigger.
Naff – poor quality and a bit stupid
Mobile phone – cell phone? Is that what they’re called?
Fry up – lots of fried food altogether on one plate - sausage, bacon, egg, tomato, mushrooms..
Chemist - pharmacist or drugstore
Cheque-book - check book
Open University - fantastic institution in the UK through which you can study for a degree by post.
Fringe – hair that’s over your face. They called them bangs in Anne of Green Gables, so maybe that’s the word still used.
Nadine Coyle Singer in Girls Aloud. Very big in the UK. Google her.
Year eight, year nine….I know this! Grades 7 and 8.
High street - Main street?
Semi - a semi-detatched house - two houses stuck together.
Estate – A council estate is an area of social housing provided by the local government. About to be abolished by current British government as far as I can see. But you can also have an estate of private housing.
Heavies – big scary thugs,
Mates - friends
Loo – toilet (is that an American word?) Thing that you use when you go to the bathroom, that isn't a bath.
Reception (at St Luke's) Pre-K.
Queuing This was the word on Anne’s list that made me fall around laughing…they don’t know what queuing is..hahaha…It’s waiting in line. Ancient British tradition.
Stodgy – full of carbs. Heavy on the stomach.
Athletics squad - track team.
Council - local government. Also about to be abolished by current British government, as far as I can see.
CV - resume
Dodgy – errrr…I need the context, but illegal, criminal, dubious should cover it.
Biscuits - cookies.
Girls Aloud - I thought they were universal! Girl band. Google them.
X Factor - British version of Pop Idol.
Bugger – Literally sodomist. Just a mild expletive.
Rubbish tip – errr…garbage dump? Landfill?
Alcopops - sweet drinks that are surprisingly high in alcohol content.
Solicitor - a kind of lawyer.
Chav - British word for ‘working class person that I despise, even if I am working class myself’
"Grass me up" - tell the police about me.
PSHE - personal, social and health education. Where they teach you about puberty,
Snog - kissing +++
Tossers –literally masturbaters. Means idiots.
Trainers - running shoes.
Chuffed - pleased
Prat - stupid person
Poxy – need context, but generally bad.
Bollocks – literally testicles. Means rubbish.
PE kit - things you wear for sport.
Narked - annoyed.
GCSE - a very important exam you take when you are 16.
Candyfloss - cotton candy
Slapper - promiscuous girl.
Craig David – has-been singer given to wearing hats and shades.
Aggro - aggressiveness.
Telly – television.
"They got no bottle" No bottle = no courage.
Minger Ugly girl. Pronounced to rhyme with singer, not ginger.
Knickers - panties. Is that what Americans call them?
ASBO – Anti-Social Behaviour Order. Given to badly behaved people. About to be abolished by new British government.
Pram-face - Rude name for teenage mother
Git - Just an insult.
GBH -Grievous Bodily Harm. One step down from attempted murder.

*Published in the US on September 2!! Whoo hoo!
** Many thanks to Emily Evans on the Facebook page for giving me this anecdote.
Posted by Keren David at 12:14