The making of Another Life, the trailer

It's remarkably difficult to find a roof that you can jump off. Plus, it's been hard to find a day for filming when it wasn't pouring with rain. Add to that an award-winning film maker who's always rushing off to war zones, or to speak at the UN, and an author who couldn't remember which year her book was being published and you can see that it hasn't been altogether easy to make the trailer for Another Life.
But here it is! Woo! For some reason blogger won't let me embed videos, so best to view it on Youtube

Anyway, the story of this trailer starts way back in the late 1980s when I worked for the Sunday Times in Glasgow. Our rival was the Observer's Scottish correspondent, one Callum Macrae. I vaguely remember him as a tall, fair, quiet bloke who I used to see in press conferences sometime. Naturally we sneered at his efforts, and he doubtless felt the same about ours.

And that was that until a few years ago when we met again and became friends through having kids at the same school. Callum now runs a television company, Outsider Televison Production which is mostly known for making stunningly good documentaries. His best known is the devastating Sri Lanka's Killing Fields
which revealed the slaughter of civilians by Sri Lankan government forces, for this film Callum and his team were nominated for the Nobel Peace Prize and for a BAFTA, and won an Amnesty award for best documentary.
Outsider TV also make literary trailers, and have worked with authors including Maggie O'Farrell, Sharon Dogar and Jed Rubenfeld. So naturally I was thrilled when Callum offered to make a trailer for me.
Originally we were going to make a trailer for Lia's Guide, but Callum kept on flying off to warzones and the UN, and it never happened. So we started early with Another Life, and reckoned it would be a good way of drawing attention to the new covers for the whole trilogy.
We brainstormed ideas for the trailer and came up with two -  scenes from a boxing club, and a boy running and jumping his way along a roof. Callum actually had some footage from a boxing club, and a suitably aged teenage son, so all we had to do was find our roof.
We called our local supermarket, the very wonderful Budgens in Crouch End because we knew there was access to their roof for the very impressive Food from the Sky project, in which they grow fresh produce on the roof to sell in store. They were happy for us to come and visit. We climbed up the staircase to the roof and found a green haven of herbs, salads and vegetables, but no space at all for running and jumping, and a sensible but (for us) unhelpfully secure fence all the way around the garden.
Next we tried Waitrose. The staff were very interested, but needed permission from head office -  health and safety . We took the area manager's number and moved on.
Further up the road the buildings are taller and older. We tried my hairdresser's -  but the manager, who I know, was out. And then my opticians, the exceptionally wonderful A View. There we struck gold. Not only did they have builders working on their roof, but they were going to have to call Terry, owner of the top floor flat with access to the roof, and get him to leave work early and come home to allow the builders to climb out through his flat. What's more, when Terry arrived he turned out to be an amateur filmmaker, who was only too happy to allow us to run around on his roof. We were on! Filming set for the following week.
﻿ Luckily, the rain held off that weekend (surprisingly, because it's rained virtually every day since March). We arrived at Terry's flat and surveyed the scary ladder out to the roof.  Did I mention that I'm scared of heights? So was Callum. Finlay, the runner and jumper, luckily was not, but as soon as we got out onto the roof and surveyed the sheer drops on either side, Callum and I spent the entire time taking deep breaths and saying 'Finlay! Be careful!' and 'Come away from the edge!'
Finlay was very good-natured about the whole thing and ran and jumped brilliantly, despite gravel, nails, junk and people telling him not to go near the edge.
And that was that. Callum and colleagues started editing and composing music, creating graphics and deciding along the way that we didn't need the boxing club footage. I waited. Eventually I got an email from Callum. It's done! Here's the link!
Unfortunately we were away at the time, celebrating my husband's birthday at a hotel by the seaside (yes it rained, but we had a great time anyway). The link came through in the evening, when we'd had a nice meal and a few glasses of wine. It took ages to get an internet link, but eventually I did it.  'Wow!' I texted back to Callum 'I love it! It just needs one thing -  a screen at the end with the name of the book,the publishers and the date of publication. September 2013.'
Well, never ask an author for accurate information when she's a) had a few drinks and b) just seen the amazing trailer for her book. Yes, they added the end shot. No, the book is not published in 2013. It's published in 2012!!!! It took a remarkably long time to sort out that error.
In the meantime I've been showing the trailer on school visits, and getting a good response. Some pupils have suggested that it'd make a great film.  I think Callum's done an extraordinary job of getting inside Ty's head (or maybe this is Archie?) and encapsulating the essence of the book.  Thank you, once again! 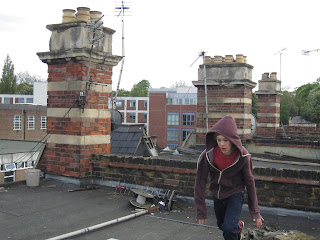