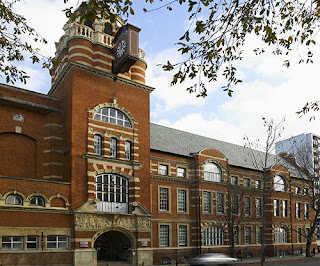 In January 2008 I signed up for a course in writing for children at City University in London, taught by Amanda Swift. The course changed my life - it's where I started writing When I Was Joe.
Amanda's now giving up teaching the course, and I'm very honoured to have been asked to take over. It runs for ten weeks, starting January 17 or April 24; it will cover many aspects of writing for children, from picture books to Young Adult. It's for everyone, whether you're aiming for publication or just want to get out of the house on a Tuesday evening.
One of the most fun aspects of preparing for the course was thinking of a list of recommended books. There were so many I could have chosen, but in the end I picked the following:

The Tiger Who Came to Tea  Judith Kerr

How I Live Now  Meg Rosoff

There are so many other books I could have chosen, but this is a list with picture books and chapter books to YA, male and female protagonists, fantasy, historical, dystopia, realism, humour,


I'm excited about taking this new step -  and a little nervous too. I've often thought I'd like to take the course again -  never imagined this would be how. If you're interested in signing up, details are here.
Posted by Keren David at 03:34 10 comments:

How could they?  They being the judges and administrators of the National Book Awards in the US who mixed up books and authors and created a huge painful mess.

Last week the shortlist of five was announced for the Young People's book award. Shortly afterwards, consternation, embarrassment, disaster. They'd listed Lauren Myracle's book Shine, when they meant Chime by Frannie Billingsley.
At first, they  clumsily added Myracle's book to the shortlist. Behind the scenes, pressure was put on her to withdraw. Today she did so, with enormous grace, saying:  'When I received the initial call about Shine being a finalist, I was humbled and honored to be in the company of such amazing authors. I was also deeply moved that in recognizing 'Shine,' the NBF was giving voice to the thousands of disenfranchised youth in America—particularly gay youth—who face massive discrimination and intimidation every day. So that something positive may come of their error, I have strongly suggested that the NBF donate to the Matthew Shepard Foundation [a charity focused on respecting human dignity among young people].”
The NBF have subsequently confirmed a $5,000 donation to the trust.
I felt pain on behalf of both Myracle and Billingsley when I read this story -  goodness knows how bad they must feel. Thing is, you don't write books with awards in mind (well, I suppose some people may, but I don't and nor do most writers.) If and when the call comes that your book has been honoured, it's incredibly special. It's a lovely surprise, a bonus, a joy -  but also a stressful experience, as you're suddenly part of a competition you hadn't expected.
Authors are not athletes, looking to stomp the opposition. We try and write the best book we can, for our own reasons. It's wonderful to win, it's less wonderful to come close. It's demoralising and disappointing to feel over-looked. But to think you're on a shortlist and then get taken off? To hear that your book has been mixed up with another one? That's an insult.
Awards for childrens' books aren't really about the authors. They exist to get children reading and reviewing, talking and thinking about what makes a good book. Some spark creativity (the Angus Book Award is a good example, with pupils creating book covers and films inspired by the shortlisted books). Others develop debating skills -  the Lancashire Book of the Year judges even take over the council chamber for their deliberations.
The best awards make all the short and long-listed authors feel special and celebrated. They take care of the authors involved and remember that we are  -  well, some of us are -  artists with delicate egos, not X Factor contestants. I've heard horror stories about awards which read out the books in descending order ('and in tenth place...') or tell the lucky winner beforehand, leaving the other shortlisters in anxious suspense.
It's not really that difficult to tell the difference between 'Shine' and 'Chime'. It's not really difficult to be sensitive, thoughtful and accurate. Lauren Myracle didn't deserve to be treated like this. Nor did  Andy Mulligan when he got booted off the Blue Peter shortlist.  I hope that the publicity boosted sales for both of them. And I hope it didn't spoil Frannie Billingsley's moment either. Perhaps they can combine to write about the experience. And call it 'Shame'.
Posted by Keren David at 09:26 2 comments:

When my son Daniel was stillborn in February 1998, someone sent me the following piece:

When you're going to have a baby, it's like planning a fabulous vacation trip - to Italy. You buy a bunch of guide books and make your wonderful plans. The Coliseum. The Michelangelo David. The gondolas in Venice. You may learn some handy phrases in Italian. It's all very exciting.

After months of eager anticipation, the day finally arrives. You pack your bags and off you go. Several hours later, the plane lands. The stewardess comes in and says, "Welcome to Holland."
"Holland?!?" you say. "What do you mean Holland?? I signed up for Italy! I'm supposed to be in Italy. All my life I've dreamed of going to Italy."
But there's been a change in the flight plan. They've landed in Holland and there you must stay.
The important thing is that they haven't taken you to a horrible, disgusting, filthy place, full of pestilence, famine and disease. It's just a different place.
So you must go out and buy new guide books. And you must learn a whole new language. And you will meet a whole new group of people you would never have met.
It’s just a different place. It's slower-paced than Italy, less flashy than Italy. But after you've been there for a while and you catch your breath, you look around.... and you begin to notice that Holland has windmills....and Holland has tulips. Holland even has Rembrandts.
But everyone you know is busy coming and going from Italy... and they're all bragging about what a wonderful time they had there. And for the rest of your life, you will say "Yes, that's where I was supposed to go. That's what I had planned."
And the pain of that will never, ever, ever, ever go away... because the loss of that dream is a very very significant loss.
But... if you spend your life mourning the fact that you didn't get to Italy, you may never be free to enjoy the very special, the very lovely things ... about Holland.

Now, at the time, this piece seemed neither relevant nor helpful, nor especially sensitive. It had, in fact, been written by Emily Perl Kingsley about the experience of bringing up a disabled child, and so it did not seem at all appropriate to us. 'Afghanistan,' I'd growl, whenever I thought of it. 'Or Siberia,. Or Hiroshima just after they'd dropped the bomb. Those would be more suitable metaphors. Not bloody Holland.'

And then -  oh irony! oh coincidence! - just over a year later, we moved. To bloody Holland. And not at all at a time when I wanted to live there, or indeed live anywhere that wasn't my own home among my friends and family and people who spoke my language.

We were there for eight years. It was hard, and I was homesick, and depressed. I envied anyone who lived where they wanted to live. I found it hard to accept that I couldn't have that control over my life.

And then, you know what, there were windmills and glorious tulips and Rembrandts. There were Van Goghs and Mondriaans and wonderful new friends and beautiful parks. There was cycling and walking and picnics in the forest and many, many other lovely things. Amsterdam, it turned out, was a healing place.

I can never be as even-handed as Italy versus Holland when it comes to a child dying. I'm sure that many parents of disabled children would struggle with the concept as well. But truly, life without Daniel has not been as bleak or pointless as first we feared. Our lives took a different path, and that we learned a great deal along the way. It wasn't quite Italy/Holland -  more like going to boot camp when you were expecting a spa break. It's not what you expect, and it's extremely hard and unfair -  but in the end it's not a completely worthless experience.

I was reminded of this story last week, in synagogue for Kol Nidre, the service on the eve of the Day of Atonement. The rabbi read Emily Perl Kingsley's words and spoke about the consolations one can find in troubled times, whatever they may be. 'Living in Holland' was how he described it, and it was truly surreal as his rhetoric described my actual experience.

So, writers, be careful with your metaphors. Think them through. Someone may end up living them.
Posted by Keren David at 15:23 4 comments: