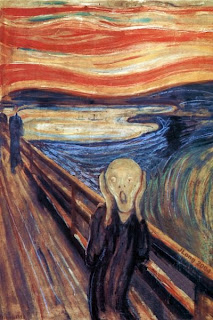 In truth it’s so hard to achieve even one of these things that it seems incredibly churlish to admit to the dark side of writing success. The fact that it's all a bit frightening.  But I suspect it’s the fear that stalks the whole process that stops many people from getting started at all.

First of all there’s the fear of rejection. That’s just something to get used to. Rejection comes at every level of the process. It’s not pleasant, it’s not nice but it doesn’t necessarily mean anything. Occasionally you can learn from it, but mostly you just have to shrug it off. I know people who invest so much in an approach to one agent that when that one says no, that's it. No more approaches. Even though the first agent may have had a closed list, or a bad day.
You just have to toughen up. Tell youself it’s their loss and get on and find someone else to try.

Then there’s exposure. When you write fiction you show a very private part of yourself to the world – and that can feel as shameful as posing for a spread in Playboy. It’s your imagination that’s going on show, and that’s something that you’re taught from childhood to hide away, even from yourself. So, it can feel scary and painful to let other people get a glimpse of your private fantasies. It’s curious that one of the most special things about being human is so little used by most of us. Again – toughen up. There’s nothing to be ashamed of. Don’t put limits on your imagination, and your writing will be better for it.

There’s the readers to fear. Every writer wants readers, right? They want to reach out to the world, touch others, change people’s lives with their stories. But that potentially includes everyone you’ve ever met. Your exes. The bitchy girls at school. Your old headmistress (gulp). Your secret crush. And, of course, lots of random stupid people who won’t get your book, won’t believe your premise and won’t like your characters. Suddenly the prospect of Rowlingesque sales is horrifying and you pray for hopeless obscurity. Hmm. Toughen up. Don’t worry about it. Identify your worst reader fear - yes, your mother - and give her the manuscript. It won’t be as bad as you think. And if it is…well, at least it’ll be over. No other reader will feel so frightening.

Apart, of course, from reviewers. Strangely enough, my first venture into journalism was reviewing children’s books. I was 18 and working as a messenger girl on a national paper and Sharon, the editor of the children’s page gave me some  books to review. The very first one was about a hamster. I enjoyed writing reviews, and I loved seeing my name in print. I spared not a moment’s thought for the poor author of the hamster book, reading and re-reading my verdict on her work. I went on to review many books. I never thought about the authors. I especially liked hardback books, because I could sell them at the second hand book shop. It's only now, as a writer, that I appreciate the power that I wielded.

With the advent of the internet absolutely anyone can review your book and post their verdict for the world to see. Reviews of children’s books in the national press are hard to get - so little space – but the multitude of blogs and sites like Amazon and Waterstones mean that few books are likely to go completely unjudged. Yes, it’s scary. But any one review is only one person’s opinion, and that person may be a messenger girl, interested in her own byline and the resale value of your work of art. Anyway one bad review is likely to be balanced by a good one. Get over it. Toughen up.

There’s failure of course. What if the book doesn’t sell? What if the reviews are all bad - or there are no reviews at all? What if it never gets onto any short list, or doesn’t sell gazillions, or never makes a foreign sale…it goes on and on. Am I going to be like an X Factor competitor who goes out in the early rounds -  so near to their ultimate dream, but so far?

There are unlimited opportunities for failure once you start down this route. JK Rowling – what a loser. She never won the Carnegie did she? Philip Pullman? Totally outsold and eclipsed (clever, huh) by Stephenie Meyer -  but who'd want Stephenie's reviews?

Forget it. If you’re so minded you can turn anything into failure. Most books don't sell very many copies. There are only so many prizes to go around. So, your friends expect you to do as well as JK Rowling and will pity you if you don't become a multi-millionaire? So what! They are completely ignorant about publishing. Much better to celebrate any little success for what it is - a success! Fantastic!

But then there's the fear of success. What if the book does well? Will everyone hate me? Will everything I write be compared unfavourably to my early success?
And what if I never think of another idea? What if these were the only books that I have in me? Get a grip for heaven's sake.

This post was inspired by Nomad who left a comment on my post about finishing two books in one day. ‘Congrats...’ he wrote, ‘This is the future I want. but it scares the shit out of me.’

Nomad, it scares me too.There are times -  lots of times -  when I lie awake wondering why on earth I thought it was a good idea to try and write books.  I just keep on telling myself to toughen up and get a grip - and there’s nothing much I can do now except enjoy the ride.

I've lived though a lot of scary stuff. I can cope with all of the above. I know it, because I've experienced much, much worse. So -   shame, misery, derision,  embarrassment, pity, envy - bring it on. I think I'm ready.