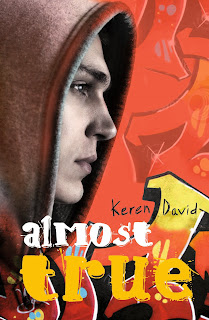 Picked as a September 2010 Book of the Month. 'A thrilling adventure in which the stakes are dangerously high, Almost True is an emotional roller coaster' Julia Eccleshare Lovereading.co.uk
Dealing with his own troubles is Ty, the good-looking, mightily confused teenage witness to a murder whom we first met in ‘When I Was Joe’. Keren David picks up his story as Ty’s protection programme is compromised. Haunted by the ghost of a man killed instead of him, Ty must come to terms with both this and his family problems. He is an immensely touching creation, all bravado and awkwardness, imagination and violence, and David’s second novel is as slick as her first.   Philip Womack's choice of Children's Books for Christmas, Literary Review
Book of the Week: The character of Ty is outstanding: David has managed to place herself in the skin not just of a teenage boy per se – no mean feat in itself – but of a teenage boy traumatised by the horrifying events he has witnessed; tormented by notions of truth and deceit, and with scant sense of who he is anymore. David is also very good on the gaps – the unspoken untruths – in what adults tell their children, and how children seek to fill those gaps by jumping to painful but wrong conclusions...
Almost True is certainly a book about big questions: truth, lies, violence, identity, and ultimately the love of others that sustains us when the going is tough. Perhaps Keren David’s biggest achievement however is that these issues play second fiddle to the psychological authenticity of her troubled hero, and the longing she rouses in the reader for Ty’s ultimate redemption. Books for Keeps
The novel has a perfect blend of tense situations and intriguing relationships, as Ty struggles to take control of his life, and more interestingly, to develop a piecemeal understanding of his past.  Mary Arrigan, Irish Examiner
In this sequel to When I Was Joe (2010), "Joe" (formerly Tyler, now Jake) continues to make bad decisions based on his very partial understanding of his own past even as he tries hard to escape the present. "Joe" was the new identity given to Tyler as part of the witness-protection program he entered in order to keep his testimony safe from influence after he witnessed a fatal stabbing. Tyler had been an insecure loner, while Joe was popular and made friends, but Jake barely knows who he is, and his new situation is even more confusing than the last. His fear for everyone's safety combines with his ignorance and a hair-trigger temper to keep the danger level high. Readers must have read the first book in order to understand this one, but for those in the know, Tyler/Joe/Jake is an enormously sympathetic character in fascinating, extraordinary circumstances. The swift pace will keep those already attached hooked to the end. The story is set in Great Britain, and a modicum of familiarity with their justice system is helpful, though not totally necessary. Framing the typical adolescent search for identity within the travails of a threatened witness—who may well be lying about various parts of his story or who may just be confused—makes for a high-octane survival tale. Kirkus

A brilliant climax to the story Keren David started so successfully in When I Was Joe makes this a red hot recommendation for all fans of the superb original. If you haven't read that one yet, buy them both at once - you won't be disappointed if you like  action-packed but character driven YA novels.  The Bookbag
Almost True is a longer book than When I Was Joe, but not a single page is wasted. As before, the style is fast and accessible and completely focused on Ty. Even when he is making terrible decisions, we know exactly why he does so and can sympathise. And when he finally finds the courage to stand up for himself and do the right thing, we can only stand and cheer him on. A truly excellent sequel from this talented author. Highly recommended.  Joanna Kenrick Write Away
Almost True is yet another powerful, utterly compelling novel from Keren David. For me, it is really a novel of our time and of our culture. I loved it....Keren David is a master of suspenseful, contemporary writing.    The Bookette
"If When I Was Joe blew my socks off then Almost True blew me off the planet." Lucy Coats, children's author.
You do care very much what happens to Ty and his family because David makes you care. And that is surely the mark of a compelling writer.   Mary Hoffman, author of the Stravaganza series.
I adored this book. Bookwitch (who picked When I Was Joe and Almost True as two of her seven favourite books of the year 2010)
ALMOST TRUE is the sequel to WHEN I WAS JOE. These two books tackle something which is always, it seems, in the news these days: knife crime. But it does it in a very original and readily accessible way. We’re in the head of Tyler, who’s involved in a knifing and has to hide out with his family under a witness protection scheme. The first book dealt largely with his life in different school in a different place and all the problems it brings as far as relationships with his peers and his teachers are concerned. The second book widens the canvas and we are now in adult world of courts and divorces and the parents and grandparents play a more important role than they did in the first book. Both together, these novels are a lively and exciting way of approaching a horrendous contemporary issue, full of believable and likeable characters.  Children's writer Adele Geras.
Where When I was Joe allows readers to imagine becoming someone else, Almost True forces readers to face up to who they really are. Pacey, thought-provoking, leavened with unexpected humour. What a good read. Candy Gourlay, Author of Tall Story.
Almost True is a must read for any teen and older readers. A powerful, enthralling story that tackles topical subjects of knife crime, gang violence and identity. And if you haven't read When I Was Joe I urge you to buy both books and read them in order, you certainly won't be disappointed. Tall Tales and Short Stories
Ty's voice is pitch perfect, so that reading Almost True feels almost like listening to an actual teenage boy relating his own story....an edgy and seriously gripping sequel with every bit as much impact as the previous book. I'd urge everyone to pick up Almost True, because once you do there's no way you'll want to put it down again. Powerful and real, this one will stay with you. I was a Teenage Book Geek
I didn't want this to end, I wanted to read more about Ty/Joe/Jake/Tom. I wanted to know what happens to him and his family, how he copes. It was that good a book. The writing style was brilliant, and Archie was annoyingly hilarious. Everything was perfect and I couldn't flaw it. I strongly recommend you read this book..... now, you won't be disappointed. The Beaucoup Review
I really, really liked this novel! It combines excitement with teenage realism, to create a unique teen book and it always has you sitting on the edge of your seat. I'd say that both girls and boys would enjoy this novel - and that's something hard to come across these days. The Mile Long Bookshelf
Almost True is written with consummate skill. It's fast paced, hugely enjoyable and slightly addictive - I would not leave my room until I had finished! Empire of Books
Towards the end I had to put my book down and take a little break because my heart absolutely ached for Ty. Everything feels so authentic that it's hard to believe that these characters are fictional. Clover at Fluttering Butterflies
A high interest book that is long but reluctant readers once they start will not be able to put it down.  Bob's Books Blog
Keren David is an extraordinary writer, and if you don't go and read her books and praise her almost immediately, then I promise that I will virtually murder you with a broom....It may be the first romance this year that did not make me want to flush my head down the loo.  The Book Bug