Another Life is out

I nearly missed it, but there's half an hour left of publication day for Another Life. 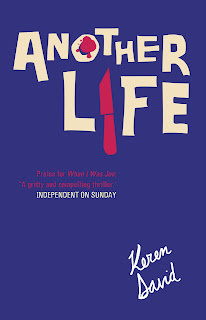 It's a very special book for me. To be given the chance to develop characters, themes and stories over three books is a real  privilege. I have to thank everyone who championed the books  -  librarians, booksellers, reviewers and above all readers.  Personal recommendation  is the most powerful force in  making a writer's career financially viable. Everyone who buys a copy of Another Life makes it more likely that I can afford to go on writing books in the future, so thank you.


I made quite a bold choice in Another Life, to change the narrator. Ty does have his own chapters, but the story is mostly told by Archie, his cousin. I hope readers won't mind the shift and willl find it interesting to look for their similarities and differences, as well as seeing Ty from the outside and considering how much they trust their view of him. The cousins are both capable of great stupidity and can be infuriatingly annoying (especially Archie) but I hope they are occasionally admirable and generally endearing. I'm very fond of them both, which is surprising as I specifically created Archie to be as irritating as possible.

I'm, also very fond of their dads, although Danny (Ty's dad) is generally hopeless (but learning fast) and I'm sure that my affection for David, Archie's fierce dad, won't be shared by any of my teen readers who are generally much tougher on parental figures than I am. Their grandfather, Patrick is possibly my favourite character in the entire series (although he's as flawed as any of them), and perhaps now is the time to admit that he was slightly based on our very own Prince Philip.

Another Life is a book about sons and fathers, crime and punishment, about rich and poor, and the inter-connectedness of Londoners despite the huge disparities in wealth. It was partly inspired by learning that children at  my daughter's school, a big inner city comprehensive, attend assemblies aimed at preventing them getting involved in knife crime while pupils at a nearby private school are warned against drug-taking and a party lifestyle.

Some people have asked me if there will be any more books about Ty. I have to admit that I think it's unlikely, as I'm now changing publishers  and looking forward to new projects. But it's possible they might make guest appearances in other books (I really wish I'd found a way of getting Archie into Lia's Guide to Winning the Lottery  I could see them getting on very well) and I'm interested in the future for Ty's baby sister Alyssa. There's one huge question left at the end of Another Life, and it involves his friend Arron. So you never know.

I've been neglecting this blog recently, for which I'm sorry, but my life has been very hectic and somewhat stressful, full of anxiety and problems. I've been working like crazy to pull together one book, and now that I am nearly finished (tomorrow, I hope) need to move on to the next one with barely time to draw breath. I've got school visits next week, including one to  Zurich International School  - I'm working on the musical for Lia's Guide, it's been school holidays and I've just started a monthly newspaper column.Things should quieten down a bit by February...except there's another book I want to write then...

It's two minutes to midnight, so I'd better post this while it's still September 6. Thanks for reading!