The t-word, David Cameron and me 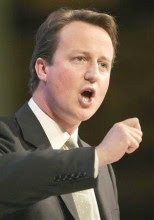 To offend or not to offend? When you pick some words you know there’s a risk that people will be upset. But other words are not so clearcut.

I’m talking about the t-word. Some people will know immediately what I mean. To them the t-word has the same meaning as the c-word and nearly the same strength. But others won’t be aware of the t-word as an offensive word at all. They think it’s a mild insult, literally a blend of twit and prat. That’s how I think of it, and that’s how I used it. That’s how my character Ty would use it. But that isn’t how everyone reads it.

One of the strange things about having your book on the Amazon Vine review programme is that the reviewers are reading uncorrected proofs - not the final version. So when an otherwise intelligent and thoughful reviewer (like all my reviewers so far!) commented unfavourably on my use of the t-word in her review, it gave me a chance to think. Was she a mad over-reactor? Or should I make a change?

I felt reasonably certain that most people used the t-word the way I did. David Cameron recently got into trouble for using it in a radio interview, making a lame joke about Twitter - he wasn’t even aware of what he’d said. Jacqueline Wilson had complaints when she used it in My Sister Jodie - and the book was changed, but  she was writing for younger children. When I Was Joe is for teens, it has a sprinkling of swear words including the one that begins with f. Was the t-word worse? For how many people? And did it matter?

I got my first clue when I asked my children about the t-word. What did they think it meant? They thought, like I did, that it meant an idiot. My husband  however turned slightly green. ‘Are you sure you should be using that word in front of the children?’ he asked. But the obscene meaning is obselete, I argued. He disagreed.

I ran a short unscientific vox pop on Twitter. Quite a few people did find the word offensive. All of them - like my husband and the Amazon reviewer, like the woman from County Durham who first complained about My Sister Jodie - came from the north of England.

Meanwhile in the comments on the BBC story about David Cameron someone tells an entertaining story of moving from south to north and shocking people with his liberal use of the t-word (just as my Mancunian mother-in-law surprised me the first time I went to Manchester when she shouted over the road to a neighbour ‘Hello, you old bugger!’)

So I discussed it with my editor - such a southerner that he, like David Cameron, was not particularly aware of the potential to offend. And we decided to change it. Because if you’re going to offend people you need to mean it. And I didn’t mean it in the way that people might take it in this case, and as it comes early on in the story it could give people the wrong idea about Ty. I don't think it's censorship, It's a writer trying to be as precise as possible in the way she uses language - right up to the deadline for making changes.

I’d thought that the mild version of the word was so generally used that the ruder one was old-fashioned or obsolete. I hadn’t realised that many people would not even know that there was an alternative milder version.

So, if you’re reading an uncorrected proof of When I Was Joe and you reach page 21, the t-word is now  ‘tosser’. I trust that’s just offensive enough for everyone

Update. Some great comments below, from top YA writers -  Luisa Plaja (Split by a Kiss and Extreme Kissing), Gillian Philip (Crossing the Line and Bad Faith) and Rachel Ward (Numbers).