The film I hate the most

Ask me my favourite film and my mind goes blank. There’s too much choice, I can’t remember them all, let alone choose. But ask which film I hate the most and it’s easy. No competition.


My most hated film stars Lindsay Lohan. But that’s not why I hate it - in fact I quite like Ms Lohan, especially in Mean Girls. I like Mean Girls because it has witty lines and although it’s played for laughs it rings true. Unlike the vile, revolting piece of rubbish that is The Parent Trap. 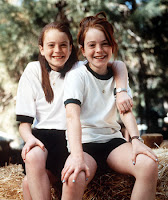 Why do I hate it so much? Is it the cutesy-ness, the way it has wee Lindsay playing twins, differentiated by accent rather than any discernable human quality? Is it the stereotype of England it pushes complete with creepy butler who - excuse me while I vomit - has a clap hands and dance routine that he performs with the little Lohan muppet?

No. None of those things. If those were its only crimes then it would be merely down there among my most irritating films - alongside Madagascar - yeuch - or the disappointing Shrek 3.

The Parent Trap’s offence is sentimentality. It has an interesting premise - twins, separated as babies by warring parents meet by chance and discover that a) they have a twin and b) they have another parent. It then drowns that glimmer of an idea in syrup, chokes it with sugar plums and garrottes it with a liquorice lace. The twins feel no rage or hatred at discovering the trick that their parents have played on them. They experience no envy, uncertainty or sorrow at the loss they suffered. There is only delight at being reunited with the parent who effectively rejected them and made no attempt to see them again. Instead of washing their hands of these irresponsible and selfish parents the twins plot to bring them back together again. Denial wins! A happy ending! The viewer is left wondering which sister will turn to substance abuse first. Perhaps Lindsay should make a sequel.

Some books and films for children sacrifice emotional  depth  for plot. That’s fair enough if all that happens is a pressing of the mute button. Not every series needs to be full of wrenching psychological angst. Anthony Horowitz’s brilliant Alex Rider series for example is all action, but when you do hear about Alex’s inner life you believe every word.

But sometimes books and films substitute real emotion for sentimentality. They sell their characters and their readers short. They fall into The Parent Trap.
Posted by Keren David at 06:41