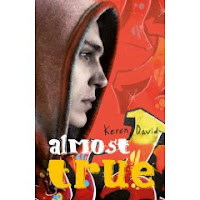 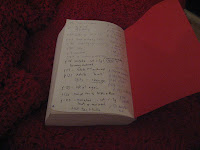 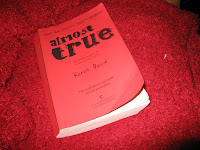 Almost True is almost a book - the bound proofs arrived last week, 435 pages thick with a blood red cover.
Some copies will be sent out immediately - to booksellers and maybe some reviewers, and the people who signed up for copies at Yunaleska's online launch party for When I Was Joe. I feel a bit strange about that - excited that people will read it, five and a half months before the launch date but protective as well - it's not quite finished yet, I'm not ready to show it yet.
In the meantime I've been reading it through and making my final changes. I mark the page and then make a note to myself in the back of the book (click on the picture). Those notes will later go into a note for my editor. So far - as you can see - most of the changes are little things that can be deleted, or small changes needed to avoid repetition. There are a few words that need to come out because they don't ring true for Ty (what possessed me to think he would use the word 'tentative' for example) So far I've only found two pages where I want to rewrite a whole paragraph.
It's strange reading it through as a book - quite a different experience from reading on the screen. This is the point where I realised that my editor was completely correct to suggest getting rid of chapter 17 - thank goodness I listened.
And whereas in When I Was Joe I became a little obsessed with feeding Ty (whenever he's tucking into chicken sandwiches, chips or fruit cake you can be assured that my Inner Jewish Mother is showing), this time I'm much more interested in his washing habits. I had only vaguely realised how often he washes in this book - the whole thing is about showers, soap, toothbrushes and laundry (err...it's a bit more interesting than that. Honest.)
I've reached page 285 in my editing, but even when I've finished I won't send it off to the editor until my chief proof-reader has read it for me. This is someone who lives with me but must not be identified further, but she is an eagle-eyed sub-editor who instantly spotted the only error to have got through me and everyone at the publisher in Joe (alas, too late for it to be excised from the first edition but as we're now reprinting then if you have a first edition it might be worth something one day. Buy now, they are running out. Page 116)
We negotiated a price for her to proof-read Almost True. I started at £10, she offered to do it for £30. We agreed £25. Yes, she is a good negotiator. But worth it..she's already told me that London teens say 'cop' instead of 'copper' which makes me a bit sad - I prefer the London word to the American - but she knows best. She's 13 after all.
Anyway, once we've made all our changes the book will be printed and ready to sell. September 2nd, according to Amazon. And very soon I'll be moving on my next project. It's actually quite a sad process when you've written about someone for two books. Ty's been my foster child...now he's leaving. I'll miss him a lot.
Posted by Keren David at 11:37